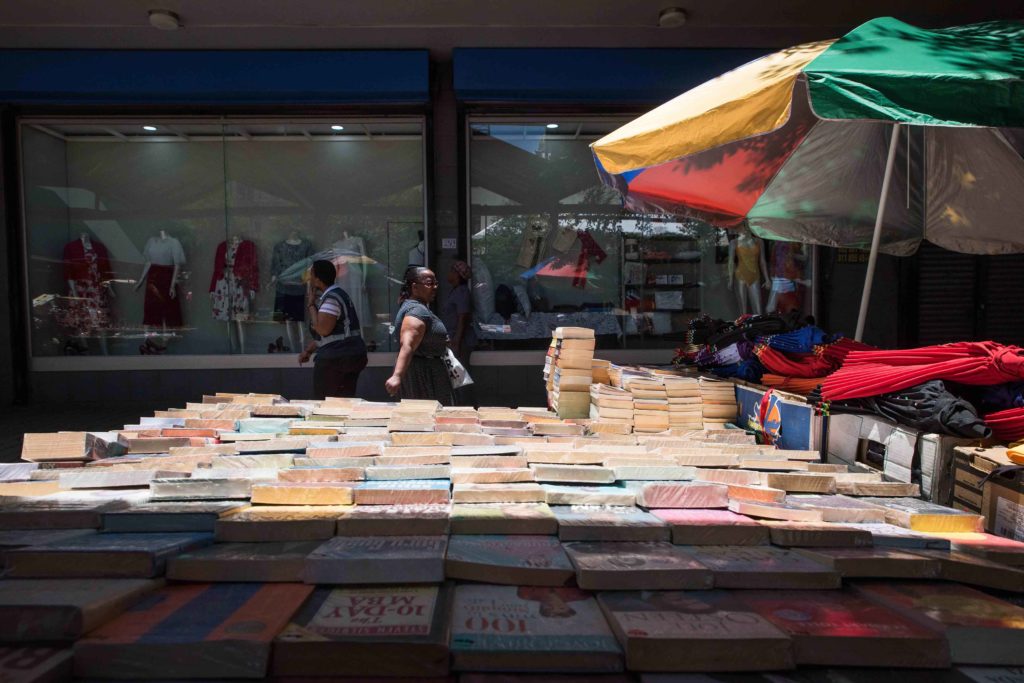 Blessing Tsakatsa shrugged off the fact that he wouldn’t be able to afford a bus ticket home to Harare, Zimbabwe, during the festive season. Instead, he continued to sell books at the bustling Joubert Street market in downtown Johannesburg.

Clutching a copy of Sheryl Sandberg’s Lean In in his right hand, a finger wedged between two pages to keep his mark, the soft-spoken Tsakatsa, 38, says he will make the journey home once he’s saved enough money. “The tickets now cost R1 000. Usually they’re around R300,” he says.

Tsakatsa’s stall is surrounded by other stalls selling a range of goods, from wigs and sweets to sunglasses and fresh produce. Nearby, a group of men in blue overalls are eating pap and meat with their hands, while a group of women huddle together and try on sunglasses.

Adjusting his peak cap, he says business has been good since he joined his cousin selling books in inner-city Johannesburg. Tsakatsa and his cousin are just two of between 70 and 80 informal booksellers spread across the city, most of whom are strategically placed between Gandhi Square and Park Station.

Related article: Mamelodi street traders left out in the cold

Like Tsakatsa, most of these booksellers are migrants who came to Johannesburg for a better life. “Business is good … It’s better than where I was working before,” he says, adding that he used to work as a solar panel installer. Tsakatsa’s cousin brought his skills and knowledge of the book trade from Zimbabwe and later introduced Tsakatsa to the business in Johannesburg.

His small, 2m x 2m stall is stacked with a range of books from popular fiction by authors such as John Grisham and biographies such as those of Richard Branson and Thabo Mbeki, to non-fiction such as Jacques Pauw’s The President’s Keepers. Tsakatsa also stocks a range of prescribed textbooks, saying many of his customers come shopping with specific books in mind. Among his best-selling books are those by American romance novelist Danielle Steel, as well as a selection of self-help and spiritual books, which he says he also enjoys.

“I read a book a week. I like to improve myself. You get a lot of knowledge from reading books,” Tsakatsa says. That is why he says he will go out of his way to find what his customers are looking for. “I’ve got clients from Swaziland, I’ve got clients from Zambia, from Zimbabwe and they’re coming here to buy books. If they’re looking for something, I’ll make a plan to get it.”

A survey conducted by the South African Book Development Council in 2016 painted a disappointing picture of South Africans’ reading habits. It found South African adults spent nearly twice as much time watching television than reading books. However, despite those grim figures, Griffin Shea, the owner of Bridge Books on Commissioner Street, Johannesburg, says there is a clear demand for books based on the number of informal traders in the city.

“Their customers, I would imagine, are mostly South Africans because most people [in the city] are South Africans. So if they are staying open, they have to be catering to local taste … I think what happens with the book sellers in the city, what it shows is that there is a desire, there is a market that is not being reached very well, and if we found ways of supporting what is already happening on its own, then more people would want to join into it,” Shea says.

A tall, fast-talking man, Shea moved to Johannesburg with his partner and their adopted son after working for a major news agency for years. Originally from Louisiana in the United States, Shea says he was struck by how few books there were for young adults reflecting the experiences of black and brown children, or children from other cultural backgrounds.

He later struck a deal with a local book publisher and set out with a backpack full of books hoping to act as the link between publishing houses and the informal booksellers in the inner-city. “It just doesn’t work like normal publishing does, the distribution system is totally improvised from the ground up … I just think it’s really interesting,” he says about Johannesburg’s informal book traders.

These informal and improvised systems also turn out to be ingenious. Shea says he’s aware of  people who would have travelled to Johannesburg from Lusaka, Zambia, for example, made contact with booksellers in the inner-city, and exchanged contact details.

“They’ll just send a WhatsApp from Lusaka and say ‘this is what I need’ or ‘what new titles do you have’, they’ll figure out the price, do a mobile money transfer, and then these guys will pack it up into a box, throw it on a bus at Park Station and send [it to] the book buyer in Lusaka. And if you’re shipping it that way, it’s only like R100, but if you’ve ever tried to courier a book, it is wildly expensive.”

Shea, who runs a monthly underground booksellers walking tour featuring some of Johannesburg’s informal street traders, believes there is a much larger demand for books but traditional bookshops in shopping malls in the suburbs might not be the most welcoming places for some people. “For a lot of [the informal booksellers], the price points are not low,” he says.

“Most of them are selling books not that far off what you would pay in the malls for them, and sometimes they are charging more than that. I have guys who have sold books for even like R100 more than what we would sell them for here [at Bridge Books] because people think they’re hard to find, and he has them and he has a readership for them. They can put their price R100 higher because there is a supply and demand issue.”

Edmund Elias, 73, agrees that there is an untapped market. “I’ve got a very large regular clientele … People do read because I’m busy every day,” says Elias, who has been selling books for R5 and R10 for two decades from an allocated spot with plenty of foot traffic outside the KFC on Joubert Street. To entice his potential clients even more, he sells the R5 books at three for R10 and the R10 books at three for R20, adding that on a good day he makes a couple of hundred rand.

“I enjoy it immensely. I enjoy meeting the people I meet every day. I’ve got a good rapport with all my neighbours and there is unquestionably more and more people who are readers and come looking for books.”

Elias, who is a trained estate agent, follows a different business plan to some of the other informal booksellers in the inner-city. “I buy books by the box from hospice and charities and at garage sales. If I start looking for specific titles, it becomes too expensive for me,” he says. On a recent Tuesday, Elias sat in the shade on a bench outside the KFC, with all his stock loaded in the back of his red Mazda 323 waiting for the AA to come assist him. “I won’t make any money today, but I will be back here tomorrow,” he says.

Leaning his arms on the counter inside his shop, FJ Nappies and Fashion on Commissioner Street, Felix Nwigwe, 42, says he makes about 50% profit on international books and 20% on South African books. Nwigwe’s shop sells nappies, luxury winter coats, herbal and natural products, and a selection of books ranging from Sun Tzu’s The Art of War to Trevor Noah’s Born a Crime.

Walking past the shop, the books on display include a number of spiritual and self-help books as well. “I’m a Christian. When people come to me with their problems, we like to help them and counsel them. I’ll give them books to help them through … we want to build them up and help them improve their lives,” says Nwigwe.

He’s been living in South Africa for nearly two decades, and has to take care of his wife and four children with the income he generates from his shop on Commissioner Street. Nwigwe and Shea share a close bond, as Nwigwe is one of the many informal booksellers in the inner-city who source their books from Shea.

Shea has formed strong relationships with many of the booksellers and was approached by 29-year-old Sandile Mavimbela while showing New Frame around. Mavimbela, originally from Swaziland, had returned from visiting his home to seeing his stall on Joubert Street destroyed and some of his books stolen.

Sitting on the trolley where the rest of his books were stored, Mavimbela looked despondent, with his shoulders slouched forward and his hands clasped together. “I left my store with someone else, and when I returned I found this,” he says. “I had to sell my cellphone [this morning] so I can make a plan. It’s getting more challenging every day.”

Mavimbela moved to South Africa in 2007 but struggled to find a job. “I wasn’t really learned,” he says. “But I found this. I make about R250 a day and I recently bought a stand in Orange Farm [south of Johannesburg].” He follows a similar business model to Elias’ where he buys boxes of books from charity shops and children’s homes hoping to find a sought-after book he can sell for a higher price.

Despite having to sell his cellphone, Mavimbela remains a reader and a dreamer. While talking about hope and overcoming the curveballs life throws at him, he pulls out of a copy of Paulo Coelho’s Brida, a book about a young woman and her quest for knowledge and fulfillment. “There are so many challenges. I remain hopeful that things will come all right. Hope is the last thing to lose. As soon as you lose hope, you can die,” he says.

Dispatches from the Village

A Tale of Double Estrangement: A Review of...

A bigger welcome mat would be in Europe’s...

World not humanistic enough to listen to Afrikan...

All publications by ASC-staff and affiliated researchers, 2004-2010...

A Pyrrhic Victory for Germany in Europe

As Egypt demonstrates, the Arab Spring is full...